skip to main | skip to sidebar

Here  is a website that offers much information.
Numerous authors have contributed their expertise to this site.
Give this a try....you'll like what you find.
Have a great day!
Smiles and Blessings,
Nancy
Posted by nancarts at 10:33 AM 2 comments: 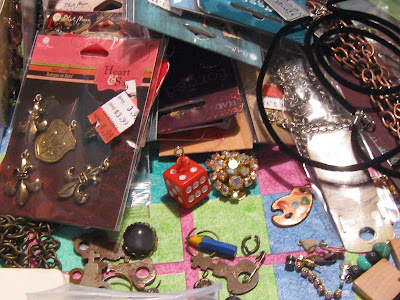 Junk jewelry!  I know you all have heard of this!  Look around the house...
empty stuff out of the junk drawers that is small enough to fit on a piece of jewelry.
This includes old keys, nuts, lost & found items, charms, game pieces, broken
jewelry, odd earrings and whatever strikes your fancy!  This is so much fun. 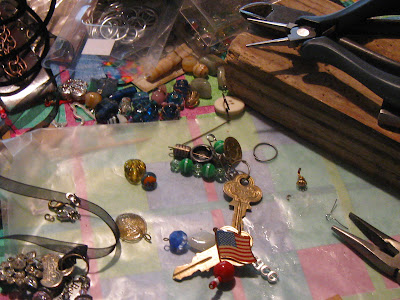 This is my work space! Today it is the dining room table!
Who knows where it will be tomorrow.
It looks like a disaster and I guess you could say it is, but this way
I have everything in front of me, and I can grab whatever strikes me! 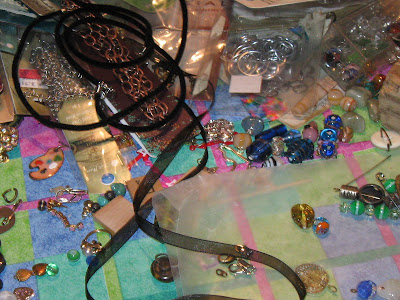 Check out my etsy store where I will be adding some of my jewelry.
Thanks for visiting!
Have a great day, Friends, and come back to visit. 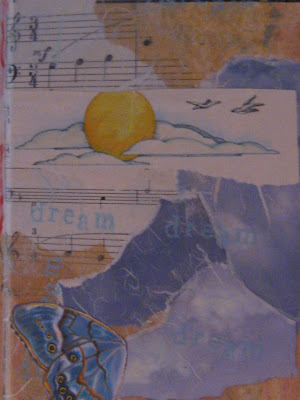 Cover of my Journal 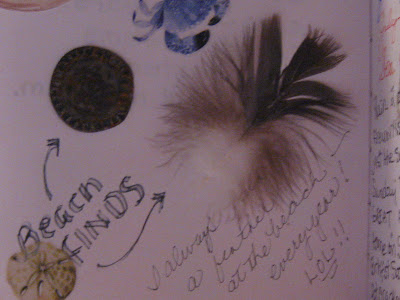 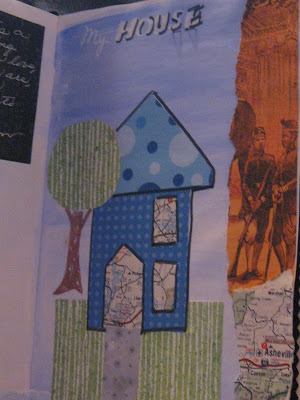 House page...cut from scrapbooking
papers and glued down. 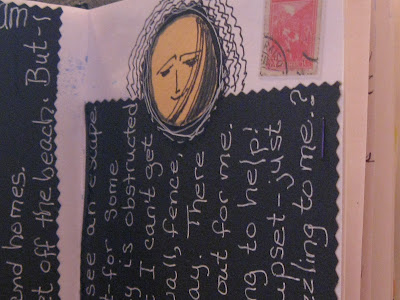 Some pages I am sharing with you of one of my art journals.
My Dream. 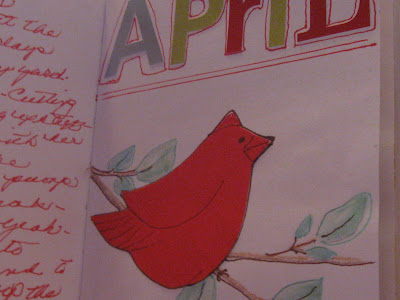 One of the months.  This bird is cut out of scrapbooking paper
and the branches and leaves are painted. 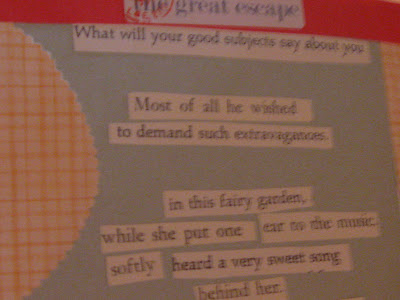 This is part of a story that I made  up using clippings of words or
groups of words.  This is a fun thing to try, because you just never
know where it will take you!  Try it for fun!

To all teachers out there who are looking for more ideas...go here!
You will find some very inspiring help here! My daughter, the
middle school language arts teacher also author, has lots of articles
on Suite 101. She is very creative.

You all have a great evening and rest of the week!

Bell Work Activities for August
Schools open this month and here is some information for you teachers out there who need
some new ideas and inspiration. Doris is a language arts teacher at a middle school who is
also an author. She has other ideas posted on Suite 101 if you care to look. She has very
good ideas.

Have a great week Friends, Teachers, and Students!

Posted by nancarts at 2:41 PM No comments:

Great news to share with you all.
A friend of mine is opening a shop on Main Street in town, so I will have a place to sell
my crafts and paintings.  Maybe even some of my antique collection.
I am  making some jewelry that features our local High School colors and team, Wildcats! 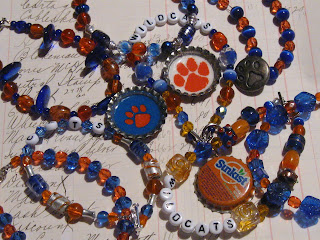 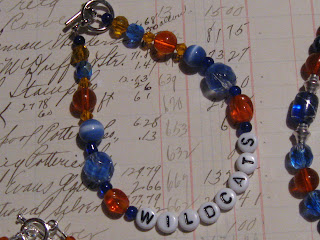 A few pics of what I have done so far.
Will keep you posted on how all this goes!
I am excited.
I had a space a couple of years ago, but the store eventually closed, so
that put me out of business as well!
Have a great evening and rest of the week.
Smiles and Blessings,
Nancy
Posted by nancarts at 4:50 PM 1 comment: 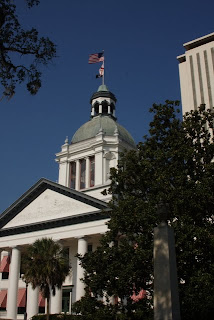 Capital Buildings, Tallahassee, Florida
The photo shows both the old and new capital buildings in Tallahassee, Florida.
The founding of Tallahassee was largely a matter of convenience. In 1821, Florida was ceded by Spain to the United States. A territorial government was established, but the impracticalities of alternately meeting in St. Augustine and Pensacola — the two largest cities in the territory at the time — led territorial governor William Pope Duval to appoint two commissioners to establish a more central meeting place.


In October 1823, John Lee Williams of Pensacola and Dr. William Simmons of St. Augustine selected the former Indian settlement of Tallahassee (roughly midway between the two cities) as a suitable place. Their decision was also based on its location near a beautiful waterfall — now part of Cascades Park — and the old capital of the Apalachee chiefdom. In March of the following year it was formally proclaimed the capital. Florida did not become a state, however, until 1845 (Tebeau:122).


On November 1, 1823, John Lee Williams wrote to Congressional Delegate (and later Florida Governor), Richard Keith Call, about the location of the capital:

"Doct. Simmons has agreed that the Site should be fixed near the old fields abandoned by the Indians after Jackson's invasion, but has not yet determined whether between the ... old fields, or on a fine high lawn about a mile W. In both spots the water is plenty and good."

The rough hewn frontier capital gradually grew into a town during Florida's territorial period. In anticipation of becoming a state, the territorial government erected a greek revival masonry structure that would befit a state capitol. The structure opened in 1845 in time for statehood and eventually become known as the "old Capitol" which stands in front of the current new capitol high rise today.

Have a great Wednesday, Friends!  I will be back soon.
Smiles and Blessings,
Nancy

Posted by nancarts at 5:52 AM No comments:

Tallahassee Three Day Week End.
It was a great time!  For me, anyway.  Visited with my brother and my grandson.
His parents were there to move him into his new living quarters, which is an old
1920's house.  There are five bedrooms and three and a half baths.
Fireplaces, front porch and a back deck.
He is officially living there!
Saturday night came a real thunder-knocker, toad strangler storm.
Wow! The lightning was like continuous! the sky was all light up and the
thunder boomed.  Don't you like a good old fashioned thunder storm?
We ate out a couple of times.  Some excellent seafood.
Made a trip to Books a Million, but didn't find the latest Somerset Mag I was looking for.
Will make a trip to our local BAM this week.  Hopefully it will be out on the shelf.
I get upset when I can't find the latest Somerset!  These are the greatest!
You  get all kinds of inspiration from just looking at the fabulous photos.
Have a great Monday, Friends!
Smiles and Blessings,
Nancy
Posted by nancarts at 2:13 PM No comments:

I have opened my own little shoppe that you can access by clicking on this picture. I will be listing items that I have made or even some vintage goodies. So, keep looking! Blessings.

Add Snippets to your site

Welcome to you all who are visitors to my Blog. Please leave a comment! I am new to the blogging world and am still learning. Would love feedback and any suggestions! Thanks so much.

nancarts
Florida, United States
I am a semi-retired woman who works part-time at our county library. Three terrific daughters and seven grandchildren and four great-grandchildren make up my immediate family. Thrift-shops, antique stores, flea markets, vintage shops, etc., are my favorites! Mixing old and new with rustic country is my style that I call eclectic. And that makes me happy. 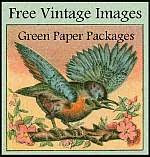